there is no money in Art

“..Showing paintings on line is now the main stream for the dissemination of an artists work, of that there can be no doubt.  Even though real life exhibitions are still relevant for many artists, an on  line presence is essential (if only for street cred).  That old bone we once chewed “painting is dead” has faded away as fast as padded  shoulders did in the middle 1980’s. There has  been a major change in attitude towards painting in  the last few years by artists and galleries. In part, this may be entirely due to the need for the high street galleries to survive the  various financial crisis that we seem to need to have in the western civilisation (just to keep us on our toes, or in chains I’m not sure). The big  money f’kd up crisis started in earnest in 2007 and is still having an effect now. Not to mention adding to the problems spinning off Donald Trump and the European Union on the brink of collapse helped along by Yellow shirt craziness and No Deal Brexit and  an old church going up in smoke.

Today, more than ever, high street galleries need to sell ‘more-stuff’ and earn extra profit to pay those stupidly high ‘business rates’ in the major Cities – And lets be honest, paintings sell much quicker than sculpture those ‘cool’ avant-garde installations of nonsense that rely on high brow art academics to authenticate the cultural importance of something that most people wouldn’t actually install in their homes, even if they don’t say so publicly. And usually there is a heavy price tag for that sort of contemporary art. Consequently the contemporary ‘arty farty’ marketplace is tiny  compared to the ‘popular paintings’ art market. Even though there are only so  many landscapes that anyone can put in their homes. That market will also run dry eventually. Maybe a very few of the  high street galleries will expand their perimeters and start  to take a risk, in half a decade or so? By which time it could be too late.

Today the sheer size of the (art) market (because of  the www) has outgrown all  that ‘arty farty stuff’ by leaps and bounds – certainly as far as turnover is concerned. So the www has become the place to set up your stall. Major funded on-line art galleries and some not so well funded independent artists all have a go at selling direct to art collectors and art lovers. Even Tubes magazine are having a go (although they already know there is no money to be made so why bother trying? - I’m told by the Editor that the space for  artists is in keeping with the magazine policy - that is “Art before profit..” ...many folks may find him, like I do, quite nuts.

The one man art galleries start-ups fail quickly- some have a sort of  ‘in the third year we will make money fiscal plan’ and obtain a bank loans. Most, in reality, loose much more money than they bargained for and are wrapped up prematurely by their investors (or more commonly the Bank)
Tomorrow will not a case of high streets chasing huge profits for many galleries, on the contrary, it’s going to be survival we are talking about here.

That wise old man may have been right after all, but for the wrong reason, as far as I am concerned. Art cannot and should not be treated as a commodity as it is today. And be sold as such - The stack ‘em high, sell ‘em cheap' policy of mass commercialism is not an effective strategy. For Primark maybe, but surely not for 'one off' original art, so when times get tough, it seem the tough get going or they bottle it and start prodcuing shit art to be sold in pointless numbers in galleries throughout Europe..

However, the galleries with guile are having some degree of success, especially the well positioned bricks and mortar establishments with an ego in charge. They do use the web effectively. Many sell-out their latest exhibition on-line, even before they hold the opening night, which simply turns into a social event. A night which also serves a vital purpose for the prospective client to actually see the Artwork for real – then the deal is invariably clinched on the spot by the religious handing over of the Credit Card or the signing of the agreement of the 12 month interest free payment scheme’ 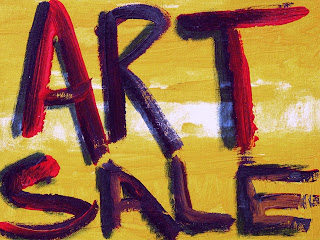 
I guess the major on-line gallery self appointed art selectors will continue to advance those artists that fit their preferred ‘trendy style’’ of the month and advise their visitors who are the ‘ones to watch out for, because next month they will be discounts galore on offer, perhaps?
Thus employing the ‘bugger the Artist’- stack em high and give big discounts - if you buy today- type of non-ethical bribery ‘games they play’ – And all with additional discounts for second time buyers, of course. Will high street galleries continue to be flooded by the hopeful newbie painters who really don’t stand a chance, or will these hoards of artists who
think they can ‘stick a jpeg on line’ with a ‘really famous named’  overpopulated web site and expect a sale?  Better be prepared for disappointment and a very long wait, my dear deluded artists friends. For you will be one of millions who reside in a virtual space that is almost impossible to be seen, unless your art is featured on the front page.

Will the on-line - ‘paid private educators’ - who tell us - How to Sell Your Art On-Line, or ‘How to paint like DeKooning’ (yes you really can view a You Tube on how to do that) ‘activity’ really begin to make a difference for the artist financially, or is all that art business on line simply a game that lines the pockets of the author who wrote this sort of bull shit ?

It seems to me, that the only way forward for painters today - is do what the Impressionists did way back in the day before the internet existed -  That is find a ’cheap’ building to rent space -
Hire it - Put your stuff on the Wall (with a few artists friends) - And throw caution to the wind, then go mental posting on social media pushing the show and have’ a brilliant time at the opening  - I mean what’s the worst that can happen? You will loose some hard earned cash and many hours of your time, possibly in a drunken stupor? But perhaps you will gain a hell of a lot of self pride (and the mutual respect of your fellow painters, maybe) and get to understand how a real artist (and a really great gallery owner) actually work bloody hard and mostly for the love of Art and not for the love of money. There is nothing wrong in selling your Art but surely it’s what and how that matters ...After all it’s just a (selling) game...isn’t it?