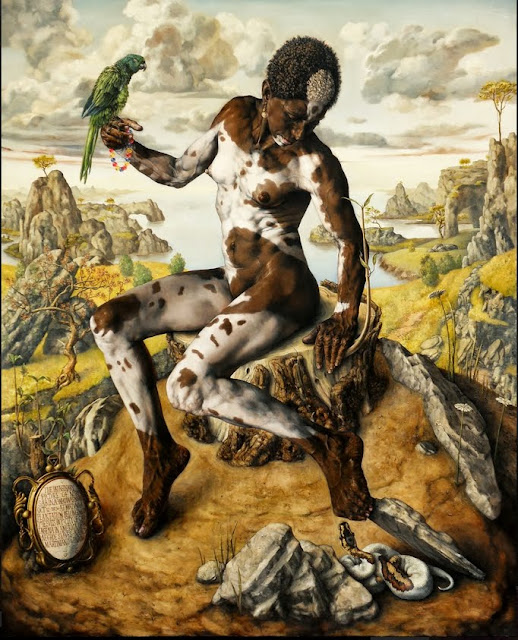 The theoretical musings of a whole battalion of academics, art critics and curators over the last five decades or so, have successfully weaned young artists off the concept of developing 'skill' or 'talent' as the prime tools for art creation.
They argued (at one time) that, emotionally content and abstract application, was the essential thing to hold dear. After that dogma of the early 20th century it became usurped by the intellect or rather that it was the 'idea' of the art, that was even more important.
And whoever created the 'Art' itself was irrelevant or unimportant. Which is pretty much what was presented by and in the shape of the 'stars' of the then contemporary Art world in the latter half of the 20th century. We now call this Art - Post Modernism.
However, there has been a seismic change in Art viewpoints of late.

The www has, in a relative short period of time, democratised visual art and freed it to a large extent. We now witness, on a daily basis (on social media), what is probably the widest array of visual art that has been seen for generations.

However, the purest 'Duchampian' form of intellectual visual art hangs on in the inner circles of the many of the Art institutions like a bad smell. They still insist to go blindly around ignoring or in some cases, (and in private) dismissing many visual artists as, non-progressives, or backward-thinking or worse still, non-contributory artists for a new millennium. Of course these same band of culture experts admire anyone who takes Art from the past and reproduces it, or more accurately, copies it, as this is seen as advanced Post-Post Modernism and in keeping with that old adage they have promoted for so long,

"everything in painting has been done already, so why bother to paint at all."

It is probably the 'realist' paintings of today that attract the most venomous critic.
After all they'd say, what is the point of copying something in front of you, when we now have the digital camera? - And to a large extent I totally agree with that statement.
What I think they missed is the point of the process of painting, one that changes the reality and why that entails a complex relationship that a painter has to develop along with the work. And not only from spending a great deal of time working with it and helping to create something that didn't exist before, but to understand that process fully one has to actually paint, not talk about, not write about, and certainly not curate, to gain that total understanding of why painters still paint, by hand.

I had all the above thoughts way back in 1988 when, at that time, the YBA's and Mr Saatchi were terraforming the Art landscape to suit the new social fabric [in the UK]. It was a time where individuality took a form of selfishness, that it was believed, to be the ideal artistic state and where vast amounts of money was the only true measure of a successful piece of Art. These artists were impatient and young, they had no time to hone a skill or tap into a natural talent, let alone develop one or even need talent at all. "we want it all, and we want it now" was their mantra, "talent is not enough" was the banner held high by the supporting tribe of culture writers at the time. They all succeeded, they all became rich beyond their dreams. They had titles and honours poured over them. They have since then, been elected into positions that were once held by Artists who, perhaps unlike them, actually deserved the accolades bestowed upon them.

And so, these first paragraphs illustrate my mind set when as a 43 year old painter I was given the task of seeking out other artists to participate in a special exhibition called Heart 2 Art - It was a project commission from the International Support Group in Sweden and the Swedish Government Estonian Trust Fund. The show was in benefit for the survivors and the families of them that perished in the Estonia Ferry disaster of 1994. It was the most important and difficult exhibition that I had ever agreed to be the lead Artist, designer and curator of. I was given the lead by the Anglo Swedish Art Group W.O.R.K (Waxholm Organisation 'Reformerandet av Konst - English trans: Waxholm Organisation Reforming Art).

It was a massive task and fortunately I was joined, by way of my invitation, by the late professor of Art and Author Nigel Whiteley (1953-2010). A person who I had long admired and read avidly in the UK Art Review magazine for several years. Together, through the many meetings and discussions, we managed to formulate a philosophical criteria to help find the artists who had the right 'stuff' for the job in hand. The philosophy was realised in over 5000 words by Nigel and was written and published exclusively for the exhibition catalogue as:

It was at this time and in this frame of mind that I discovered a painter in Argentina, Gabriel Grun. He became one of 27 Artists selected from nine countries that was finally exhibited in the Heart 2 Art exhibition in 2002 in Stockholm (after the 4 years the project took to complete). The show was an eclectic mix of visual art that was to demonstrate the altered realities of humankind. And Gabriel's work was a part of the show that visualised a link with the past and a new-vision how that link can be interpreted for the future. I still keep in touch with many of the artists from that exhibition, some more closely than others, but Gabriel was one I always kept my eye keenly on, to see how he progressed with his work.

Over the years Gabriel has been recognised as one of Argentina's finest 'fine artists' - His dedication to filling the gaps that he feels have been left by the renaissance artists has, to my mind, been an impressive voyage. Yet, beyond that he has also 'tuned' himself from the stubborn art student who walked away from a modern art establishments curriculum in Buenos Aires, to a husband and father and a more mature artist. 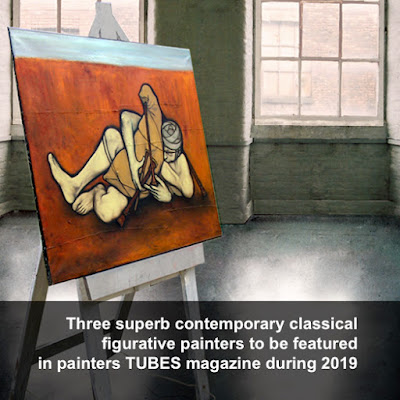 He is not alone in his pursuit of a classical perfection in a modern idiom. Many artists have gone before him. Dali is perhaps a good example, as is Odd Nedrum (Norway) and there are more, as no doubt readers of painters TUBES magazine has discovered. Gabriel Grun is however unique in the way he not only portrays realism, but also in the manner in which he does it. He has described this way of working as an alphabet, one that he has had to learn and continues to learn, but he then transcribes his own visions by reforming and inventing [visual] words using that alphabet and creating new narratives.
He attempts (and succeeds in my opinion) of making an image that 'sticks' to your eye and your mind. An image that has a tendency for the viewer to take the image (and sometimes the disturbing) narrative away with you after viewing his art.

There is always the danger of making subjective judgements, especially where paintings are concerned. As Gabriel says himself, some sort of anachronistic story telling is not his target to dynamic art creation. His art has a more direct desire, one of landing a punch packed with power. Some of his earlier works have a definite erotic tone, which could be the exuberance of youth and which, as he said recently to me, that in his current life he is not in sympathy with, nor feels that he needs to call upon, to give his work the emotional power or punch that he sought, when he was painting in Buenos Aires.

Painters Tubes magazine will be including Gabriel in a review of work that reflects a 'classical contemporary realism' during 2019.